I haven’t been here much recently. By here I mean both on the blog and in the galley.

My enthusiasm for the blog ebbs and flows like the tide. Ironically, when we finally have half decent internet access and I get a chance to ‘catch up’ with the world is when I experience the most resistance to blogging. I start comparing our adventures to the thousands of other sailing and travel blogs. I spend too much of my time online and I find myself thinking things like “Oh, this would make a good blog post”, and “Gotta make sure I get a good photo to post online.”

Thinking of our lives as fodder for the blog, as not much more than material for a story, means that I am not being present in my experiences but rather just recording them. Living your life for someone else, an unknown, online audience, is exhausting. So, I chose to put down the camera, forget about the blog and just enjoy my time exploring the world with Steve. Only when I fill myself with enough real-world experience do I feel able to come back to this virtual world.

My time in the galley has also been brief as of late. This is partially because we’ve been trying to cover a lot of miles in the Philippines, without the help of much wind. This has meant early departures, lunches underway and two tired crew that can’t be bothered to stand over the stove after they’ve just thrown the anchor. There has been a lot of rice and fill-in-the-blank meals; spicy beans, shredded chicken with a splash of salsa, veggies and a fried egg. There’s also been lots of quick bowl dinners; pho, whatever’s in the fridge salads, pasta served with a hasty pan sauce. There’s been lots of leftovers. It’s food that fills the belly but doesn’t really inspire the soul.

It is also because ready-made food in the Philippines is practically on every street corner, and we’ve been taking full advantage.

By ready-made I don’t mean convenience food, although I must admit that I have a soft spot for siopao, a steamed meat filled bun that isn’t exactly good for you. Ready-made food refers to rotisserie chicken huts, the place that roasts pork belly or whole pigs over charcoal, the man that sets up on the corner with a cart full of shish kabob and a small grill. Then there are the snack vendors who roam the streets throughout the day hawking everything from green mango to quail eggs, fresh roasted peanuts to the local delicacy balot, a fertilized duck egg that has been hard boiled. 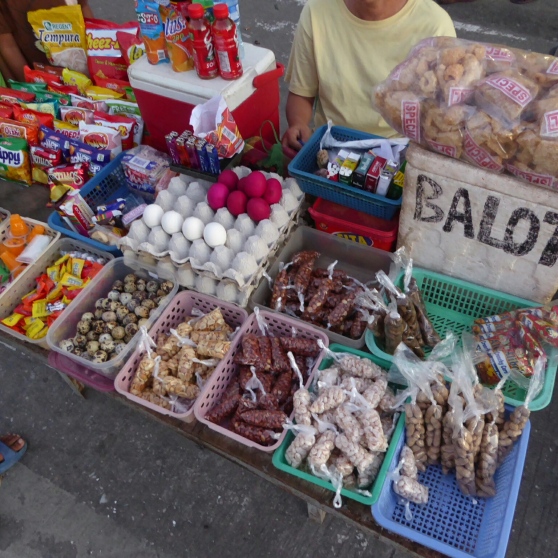 It’s been hard to resist kicking back at happy hour at a local café with a cold beer that cost a dollar watching the world unfold. It’s been almost impossible not to sample everything that has been on offer, including that crazy duck egg. 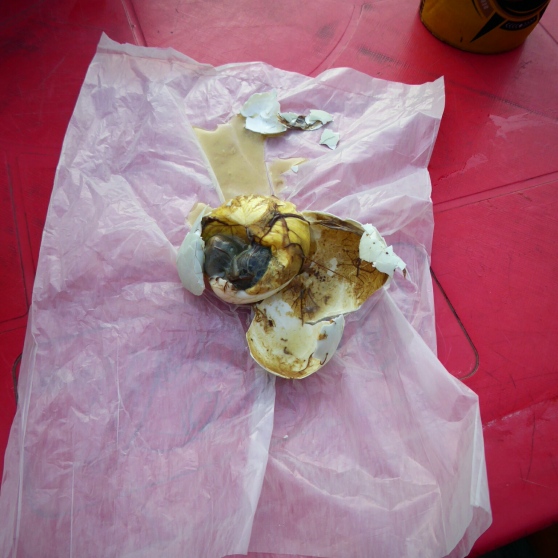 Balot, a 16-21 day old fertilised duck egg that is hard boiled. Highly praised as a healthy, energy rich snack, popular in the afternoon in the Philippines

As soon as the sun dips below the horizon and long shadows give way to the dusky evening the streets become a hive of activity. Towns transform. During the day they are lethargic and humid, blinds on store fronts are drawn tight against the harsh sun and people laze, napping in the shadows. In the cool, pre-night air the energy is electric; kids play in the alleyways, motorcycles prowl the streets and people congregate in the public square. And, best of all, charcoal smoke dances on the evening sea breeze and the air is filled with the mouth-watering aroma of dinner.

We buy a rotisserie chicken on the street almost weekly. For 50-100P (2-3 bucks) more than you can buy a whole, uncooked chicken in the market you can buy one that has been roasted over natural charcoal. The spit, which is sometimes bamboo, is turned by hand or by a foot peddle, the skin is basted with a BBQ-esque sauce that is heavy with spice, the inside is stuffed with a bundle of lemon grass. You can point to the one you want and the guy takes it off the spit and puts it in a bag, sometimes wrapped in a banana leaf, right in front of you. 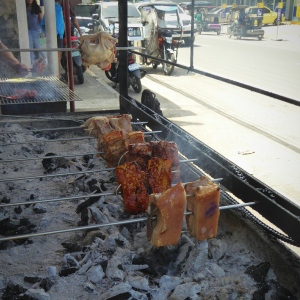 Liempo on a spit

Often Steve buys a portion of roasted pork belly, or liempo, that is also roasted on a spit. For about $4 there is enough for 3 three meals for one person. Never a fan of pork belly, a cut I find has too much fat and not enough meat, I usually can’t resist sneaking a bite or two of liempo when meal prep is underway back on board. Both are cheap and easy yet are whole, natural food. Both save us from burning through our propane tanks on board, tanks that in the Philippines are ridiculously hard to get filled.

Wherever we go there’s the local stick meat cart. Stick meat, or kabobs, are something I generally shy away from. I am pretty picky about my meat, always have been. Fat and gristle have never had a place on my plate, and don’t get me started on chicken skin and the Aussie favourite pork crackle. In fact, you can keep your chicken legs and T-bone too, I dislike dealing with bones after my meat is cooked. Yet somehow here in the Philippines I just can’t resist the stick meat cart.

At such carts you’ll find a variety of meat on a stick items of the chicken and pork variety. You choose your sticks and either hand them to the guy manning the little habatchi- like grill or if it is busy place them in the ready to grill line up. Generally a stick is between 10-12 P, or about 25 cents, and 2 or 3 make a nice evening snack or a light dinner. You have to get in on the action early or you miss out, a full cart can empty in only a few hours.

Steve, the more adventurous eater between us, has ordered a few of the less western sticks. Slices of pig ears and pig cheeks, which besides being a bit chewy (I did have one bite of ear after he assured me it wasn’t totally gross) were tasty. He also ended up with a stick of pork liver one day by mistake and said it was good too.

In Luzon we started seeing chicken feet and chicken heads on sticks, one each per skewer. There are also blood blocks. Pigs blood that has been boiled until it congeals, then it cooled and cut into small squares. Neither of us think it looks particularly enticing. Then there is the isaw baboy, pork intestines, they are crazy about their pork products in the Philippines.

The most popular offering at every stick meat cart is isaw manoc, or chicken intestines. Skewers of these little squiggly tubes, like over-cooked spaghetti, always sell out early. If you’ve eaten a good sausage you’ve eaten intestines, that’s what natural casings are. So, it isn’t such a big stretch that they would just thread them onto a piece of bamboo. Still, we wondered what the fuss was all about, so we tried a stick.

I expected a little crispy snack but they were rather soft, almost creamy. However, it was the taste that surprised me most. For being everyone’s go-to stick pick I figured they must be super tasty. Surprisingly they didn’t taste much chicken, in fact they were rather bland. The flavour was picked up only by the light brush of sauce and the chance to dip it in a jug of chilli cane vinegar. Chicken intestines are certainly nothing to write home about, let alone order twice.

My favourite is the baboy, or pork. Cut into thin ribbons it is all meat but for the small layer of fat and skin on one end. Often it has a brush of sticky, slightly sweet sauce, which varies from cart to cart. I like to ask for mine well done, not because I am concerned about the quality of meat – this is all backyard raised animals, most often slaughtered only hours before it hits the street – but that extra minute over the coals makes something magical happen to that little bit of fat at the end. Suddenly, when it chars, it turns into a crispy on the outside, soft on the inside little bite of gooey sweetness, like a pork flavoured marshmallow. Usually I would toss the bit of fat on the ground for the roving stray dogs to devour but not if it’s done right. Not if it turns into pork candy. Ummmm….pork candy.

Many stands pack your grilled sticks to go so you can hop right on your motorbike and zoom home. More often than not these take-aways are in plastic bags, but occasionally they get wrapped in a piece of newspaper, like aromatic meat bouquets. We prefer to just stand on the street, eating our stick meat in the company of the locals, under the glare of the bar bulb of the meat cart.

We spent two weeks in the small town of Romblon and, after round robin taste test of all the local stick meat carts, chose our favourite. After our second visit, the man and his grill guy knew exactly what our order would be and how we liked it cooked. Sometimes we got preferred grill space, we were always given local prices and a big smile.

One night when his grill man showed up late and I almost offered to help out. It wasn’t standing in the smoke or the furious fanning of the flames that intimidated me it was the knowing that I would never be able keep it all organized; the parade of stick bundles, the rapid-fire orders, the constant moving of the skewers around the grill to take advantage of the hot spots. It might be a humble street cart but it was run with the efficiency of a busy city restaurant.

So, now I am full, both literally and figuratively, and ready to be here, on the blog, a little more often.