Last fall, when I was home in Canada, I had the opportunity to help my oldest nephew out with a school project.

As a grade nine student Cameron was looking for someone to job shadow for a day. Usually this means going to work with a parent, but as he had already spent time with his Dad at the office I suggested that if he wanted to experience something new I would be happy to share my typical work day with him. To my surprise he jumped at the opportunity to get a glimpse inside the life of a writer.

To give him a real feel for what it’s like be self-directed and self-motivated I suggested that he could write a blog post for this site, as long as it related to boating. Cameron, an outside-the-box thinker, quickly came up with the idea to compare his family’s summer experience living in the camper, which they sometimes loving refer to as their “Land Yacht”, with our life on board. I asked him to read through a couple of blogs posts to get a feel for what he would be writing and told him we would start work at 9am the next morning.

We set up shop at the kitchen table and each started writing; Cam his blog post and me an upcoming article. For two hours, except for the clicking of laptop keys and the odd question or comment, the room was quiet. We broke for a quick snack (I raided Cam’s Hallowe’en treat bag) and then it was another couple hours of work before we stopped for a picnic lunch outside on the deck. 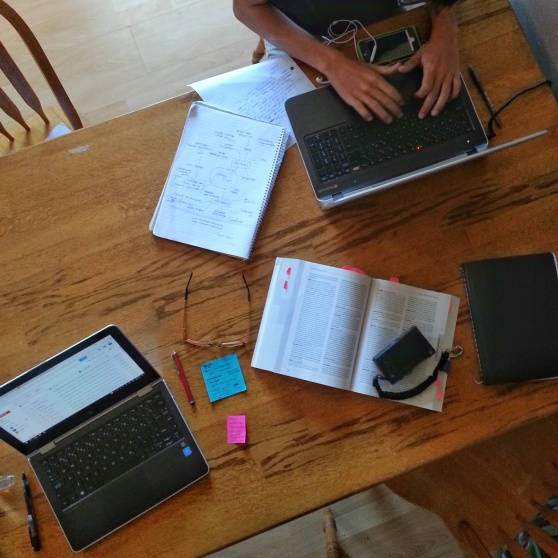 With most of his blog post written we spent the afternoon editing the piece together. I showed Cam how to tighten up his prose, and Cameron taught me a few things about online grammar programs. Then Cam wrote me a query email, pitched his post idea and sourced photos.

I really enjoyed spending the day with Cameron; writing, editing and learning from each other. It was exciting to share my passion for words with the next generation, and maybe even foster the ambitions of a young writer. I hope you enjoy his musings about life “on board.”

I spent last summer camping in our 1997 Mallard M-35V trailer with my family. We had been camping before but this was the first time that we spent almost all summer at the campground. Close to the end of July, my Aunt Heather came to visit. It was her first time home in five years. She has been living on her 41’ sailboat, Kate, sailing the Philippines and writing her blog.

We inevitably ended up talking about living a boat and camping in a trailer. Both are extremely different in some ways but they were also quite similar in others.
For instance, pests were an issue on both my Aunt’s yacht and on our “land yacht”. 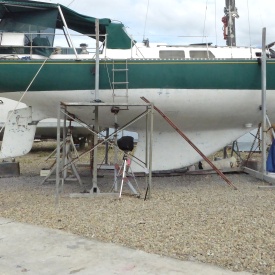 If we didn’t take precautions when leaving either the trailer or the yacht for more than one month, we would be welcomed by an infestation of cockroaches and ants. If we were really unlucky we could get rats or squirrels. We’ve even had problems with skunks at the trailer, all just too happy to destroy everything in their paths.

They also both need to winterize if they go to a place where it gets too chilly, lest the pipes freeze up or worse yet, breaks something costly. Both the yacht and the trailer require a continuous upkeep however that isn’t the only thing they both have in common.

Both a trailer and a yacht have an inherent aspect of travel to them. A trailer is towed around to campgrounds and national parks (and the episodic Walmart parking lot) where they stay anywhere from just one day to several months. Whereas a yacht is sailed to anchorages and marinas where they do the same. Both camping and yachting build a community, where you can find yourself interacting with people that you wouldn’t typically interact with normally.

They also both have the characteristic of being self-contained. The two modes of travel allow people live, cook and sleep where they park, and the users have to consider power and water activity. However, there are just as many differences, if not more, than what the have in common.
Immediately, we hit the first difference. We’ve got yachts which are water-based, and trailers which are land-based, and these both give a yacht and a trailer vastly different traits. For instance, trailers can travel anywhere that is landlocked but on the flip side, it can only go on roads or other developed areas. Whereas a yacht is much more free in the water but is dead out of luck when it’s heading towards Saskatchewan.

There is also the environmental effects of the two. A yacht is, in theory, more environmentally friendly than a trailer, as yachts can be powered by wind and solar energy while trailers are towed by cars, which are fuel guzzling death machines. While one may think that a hybrid or an electric car would be more efficient than a yacht well, that’s where you’re wrong, kiddo.
One thing the trailers do have going for them is that they aren’t on the water. This means that the majority of the time, trailers stay relatively stable when they aren’t moving. To add to this, boats need to pay much more caution to any bad weather sweeping through the area, where a large trailer should only need to worry if it plans on being towed in very high winds. Boats, on the other hand, are much safer than automobiles when you look at the fact that there are so many more cars that are being driven, so much less space to drive on, and so many idiots who found their way on the road, it’s pretty clear that you’re more likely to get into an auto incident.

One last difference between them is the fact that trailers will normally have much more space, because boats are designed to be aerodynamic, meaning when on a boat you will have significantly less space than in a trailer.
In conclusion, I think that there are plenty of similarities between trailers and yachts that a lot of people don’t think about but they are certainly there. Is it interesting to think about, isn’t it?

One thought on “Land Yachts: A Guest Post by Cameron”