We have spent almost a week in Noumea, getting familiar with the lay of the land you might say.

Our biggest stumbling block, surprisingly, hasn’t been the language barrier. I have to admit I am pretty proud of my abilities communicating in French this time around. I have managed not only restaurant orders but telephone calls and getting directions.

And it hasn’t been navigating a new city. Travel often and you develop strategies for blending in with the locals and methods of finding what you want/need quickly.

Oddly enough the biggest culture shock has been the marina. I know that sounds strange since it seems like we just left Vuda Marina, but Fiji ain’t got nothing on New Caledonia in the marina and boat department.

END_OF_DOCUMENT_TOKEN_TO_BE_REPLACED

As the final countdown to Christmas begins the days are noticeably longer in the Southern hemisphere. This is not exactly putting my cold Canadian heart in the festive mood. I really am dreaming of a white Christmas.

Thankfully we’ve recently gotten some much needed rain. I am talking middle of the night downpours with thunder and lightning that leave the yard a slippery muck hole in morning kinda rain. Add to that a couple days of sun and the grass is long and green and the all the flowers have perked up. It was beginning to look depressingly brown around here. END_OF_DOCUMENT_TOKEN_TO_BE_REPLACED

As we come the end of October we are officially entering the South Pacific Cyclone Season. It is a time of year that is fraught with angst as people keep a close watch on the weather and do one of two things:  1. Sail to some place that is less storm ridden, like Australia and New Zealand. Or 2. Batten down the hatches, cross their fingers and stick it out some place like Fiji.

Everyone we know that has chosen the sail away route says that New Zealand it is an amazing (once you get there). But the prospect of sailing to a place that is notorious for its rough weather and cool temperatures has never appealed to us. As the old saying says, “Nothing goes to weather like a Boeing 747.” We’ll get there.  Someday.  Just not with Kate.

We, like 39 other boats, have elected to spend the season in Fiji (again), safely tucked into a cyclone pit. Or as they are also called, a Graveyard berth.  There are still a few empty pits in the yard but boats are hauling out daily and very soon there won’t be a empty seat in the house. Since this has been a bit of a fill-the-coffers year for us we hulled in June, when most boats were out sailing, which meant we had pick of the pits. We chose one that away from the crowd, had a nice view and a bit of breeze.  It was comfortable, quiet and private.  That was until earlier this week when we got next door neighbours. 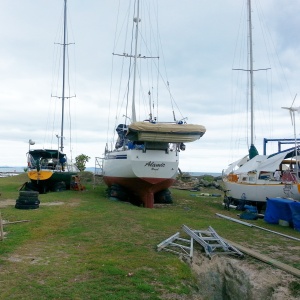 END_OF_DOCUMENT_TOKEN_TO_BE_REPLACED

So, here we are, working on week three of being back from vacation in Australia (yes, yes I see your eyes rolling and hear the gasps of “your life is a vacation!”, but it is not, really).

We escaped Vuda Marina relatively quickly. In just over a week we had put all the running rigging back up and canvass back on, replaced two more through hulls, put the boat back in the water, did a rig check, filled the fridge, freezer and holds full of food and threw off the dock lines.  I was giving my self pats on the back and puffing out my chest when people complemented us on being so organized; all that hard work while Steve was away working hard paid off. We could simply splash and get out to enjoy sailing around Fiji after three long years in the country.